Rabbits and hamsters are both adorable pets quite popular in many households. If you already have a bunny and are probably thinking about adopting a hamster, you might be wondering, do rabbits get along with hamsters? This article digs deep into whether these two species can coexist and if not, why?

Do rabbits and hamsters get along?

The short answer is no. There are quite a number of reasons why rabbits and hamsters are incompatible pets. For starters, rabbits are lagomorphs while hamsters are rodents. What this means is that both have different behavior and social needs thus making it impossible to get along, in addition, their size peculiarity also makes interaction dicey as we shall expound further. Below are some of the main reasons why rabbits and hamsters can’t coexist in the same vicinity. 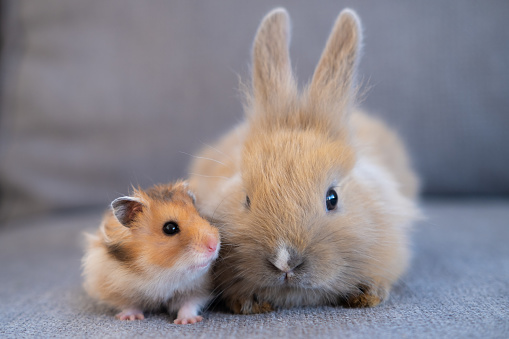 One of the main reasons why the two fluffy animals aren’t compatible mainly boils down to their size difference. Although there are size exceptions for both species, we’ll only look at the standard size.

Hamsters normally weigh between 0.5 to 10.5 ounces; while the average weight of a rabbit is 6 to 10 pounds. In other words, a rabbit can accidentally injure a hamster during playtime, or worst case scenario, it may end up killing the latter during a fight. In addition, the size difference may also cause stress and anxiety to the already extremely timid hamster. Not only will they have to worry about their safety, but your already territorial rodent now has to compete for personal space.

Both rabbits and hamsters are naturally territorial and will often attack intruders. Although rabbits are more defensive than territorial when compared to hamsters. They’ll normally send a warning before attacking their counterparts who are more vicious and territorial and will attack without hesitation. For instance, if a rabbit invades a hamster’s territory unintentionally, the latter will attack without warning. Rabbits on the other hand, when provoked are defensive and won’t hesitate to return the favor, especially if it’s a rodent that’s way smaller on the offensive.

Rabbits are skittish (startle easily) while hamsters are naturally timid (lack courage or confidence). Even if you were to confine both in the same environment, they wouldn’t know how to bond considering that they’re both prey animals with odd social behavior. A rabbit may make its rodent counterpart timider with its size, while a hamster’s territorial behavior can easily startle a bunny. In the end, their interaction may be unusual and uncomfortable for both species.

In terms of energy levels, rabbits are generally hyper, unlike hamsters who are laidback and prefer to rest most of the time. Keeping them in the same environment is, therefore, a recipe for chaos. A bunny is quite playful and may often hop around a hamster’s territory which may get on the latter’s nerves. In turn, your hamster may lunge at their intruder or try to fight them off, something that won’t sit well with a rabbit.

The other behavioral difference between the two is that a rabbit is a social animal that thrives on human interaction. Hamsters prefer solitude and normally do great living on their own, however, they don’t mind getting attention from time to time. In short, a bunny may want to snuggle while a hamster will take offense, and am sure by now you know the rest of the story. In short, due to their temperament differences, a rabbit and hamster don’t make the best pair.

Will rabbits and hamsters get along if their interaction is supervised?

Unfortunately, they won’t. Rabbits and hamsters should never be left to interact even under strict supervision. Regardless of whether everything looks fine and dandy, it only takes a split second for everything to go south. Even if they’re friendly with each other, in the long run, their interaction is still a ticking time bomb. If you must keep both animals, always ensure that each one has its own space that the other can’t access.

What animals can bunnies get along with if not hamsters?

Although the best rabbit pair is a neutered buck and a spayed female, there are several other species that can coexist with bunnies. However, they should be well-mannered and not display predatory signs towards your pet. Animals your bunny may get along with include cats, dogs, small birds, pigs, and turtles. Also check out this article on How to bond two unspayed female rabbits

Do rabbits get along with hamsters? No, as a matter of fact, hamsters hardly get along with their kind, let alone other pets. In case you intend to adopt both or add one species into your household, always ensure that your rabbit and hamsters are far apart. If not, place barriers between them to avoid aggression, injuries, or worst case scenario, the death of your beloved pet.