Rabbits come in a variety of colors some of which are rare or unique. However, you might be asking yourself, do blue bunnies exist? Yes, they do, and the only rabbit breed in the world with an officially recognized blue coat is the American Blue Rabbit. Although this bunny has two official colors Blue and white, we’re going to talk about the former breed. 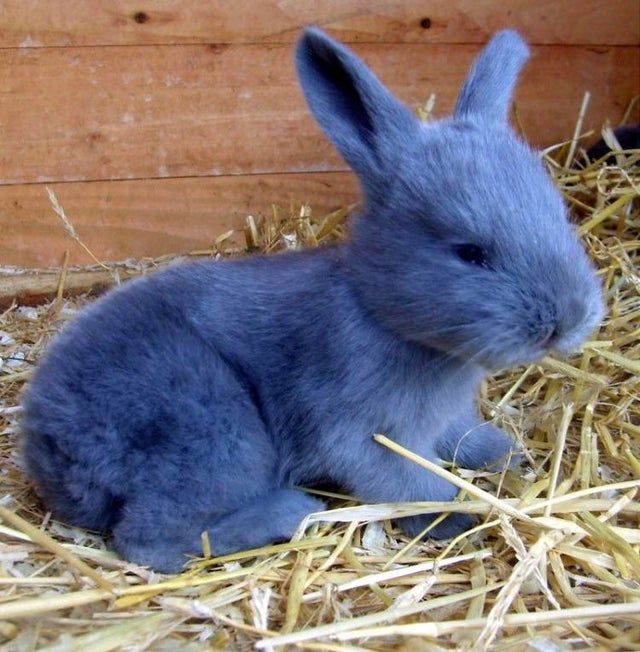 The American blue rabbit is a rare breed that belongs to the Oryctolagus cuniculus species or the European rabbit. This particular breed was developed in the United States in 1917 by Lewis H. Salisbury. Initially, it was called the German Blue Vienna, however after world war I, the name was changed to American blue rabbit.

Although Lewis never disclosed the specific rabbits used to breed the American blue rabbit, they have a close resemblance to the Beveren, imperial, Vienna, and Flemish giants. This blue rabbit is considered a rare breed mainly because various breeding attempts have been futile. This is simply because the imperial rabbit, one of the primary breeds in the development of the blue bunny has gone extinct.

This particular rabbit breed was initially kept for its meat and fur back in the 1940s and 1950s. However, a decade or two later, after the collapse of the commercial market in the US., they were mainly hunted down for sport and also their incisors. By the 1980s their numbers dwindled significantly. The American blue bunny is currently considered one of the rarest breeds since it’s also the only one with a blue coat.

American blue rabbits are no different than other rabbit breeds when it comes to their care. In terms of grooming, avoid bathing your pet since it often stresses them out. Bunnies are self-grooming animals, hence brush their fur once every one or two weeks. Also, ensure that you spend at least a few hours per day petting or bonding with them.

In addition, your bunny equally needs to be mentally stimulated, therefore you need to provide them with bunny toys that keep them engaged. Lastly, occasionally trim their overgrown nails using bunny clippers or have your vet take care of that.

In terms of temperament, this rare blue rabbit is calm and docile. In other words, the breed is essentially a great pet for first-time rabbit owners. The main reason is that they were bred to be easy to handle since in the early 1900s they were used for commercial purposes.

Although this particular breed has no major health problems, just like most rabbits, they’re susceptible to common ailments. Some of the health-related issues include abscesses, blocked tear ducts, overgrown teeth, ringworms, or ear mites.

The American blue rabbit has an average lifespan of 8 to 12 years. However proper hygiene and care in addition to annual veterinarian checkups will improve their quality of life and longevity.

Always ensure that their habitat is spacious enough for them to hop, exercise, and play in. Averagely, American blue rabbits living space should be at least 12 square feet while their hutch should measure 6 ft. x 2 ft. x 2 ft. Make sure that their enclosure is conducive and secure, in other words, safe from lurking predators especially if it’s outdoors. Finally, clean their hutch or cage on a daily basis and replace their beddings too.

How much does a blue bunny cost?

Depending on where you purchase your bunny from and the age of the bunny, the average price is normally around 30 to 50 dollars. In addition, you’ll also need to factor in their feeding, housing, grooming, and annual veterinarian cost.

How many colors of rabbits are there?

What color is a blue rabbit?

We have several blue rabbit fur colors such as the slate/medium, steel /blue with silver, and tortoiseshell /blue with beige. What is the rarest species of rabbit?

The Sumatran striped rabbits are considered to be one of the rarest rabbit species in the world. We only have a number of actual footage of this wild bunny. In addition, only a dozen specimens from the 20th century are found in museums worldwide.

This rabbit breed type typically weighs under four pounds and has a distinctive gray and brown striped pattern with a reddish rump. Another unique thing about the Sumatran striped rabbit is that, rather than being crepuscular (active at dawn and dusk), they’re nocturnal. In other words, they hide in their burrows during the day and only come out to feed at night.

What rabbit breeds get along with dogs